Cyber Security For Power Energy And Utilities In India 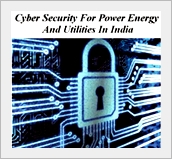 Cyber security challenges for smart grids and utilities in India are not unknown these days. Recently, India's power minister Veerappa Moily constituted a three-member panel to investigate massive power failures in the country a few days before.

Keeping in mind the cyber attack angle, he also added four additional members, including a cyber-security expert in this panel making it a seven member’s panel. It is obvious that India is excluding any possible cyber intrusions and cyber attack upon the power grids that may have resulted in blackout.

Power grids and utilities cyber security in India and their challenges are not easy to manage. They require a systematic, dedicated and security oriented approach on the part of Indian government. In fact, smart meters are becoming headache for power companies world wide.

Perry4Law Techno Legal Base (PTLB) strongly recommends that Indian government must ensure cyber security of energy and utilities in India as soon as possible. SCADA may be the new cyber attack priority for cyber criminals and rouge nations. We must ensure sufficient cyber protection of SCADA systems in India in general and critical infrastructure in particular.
Posted by PTLB at 8:02 AM No comments:

We have no critical ICT infrastructure protection policy of India  as well. Sophisticated malware like Stuxnet and Duqu have already proved that critical infrastructures around the world like power grids, nuclear facilities, satellites, defense networks, governmental informatics infrastructures, etc are vulnerable to diverse range of cyber attacks.

Cyber Security Firms, Companies And Consultants In India Must Be Pro Active

Cyber security issues in India have been emerging in India these days. With the growing numbers of cyber crimes in India and cyber attacks against India, we need more cyber security firms, companies and consultants in India.

Cyber security firms, companies and consultants in India must be pro active towards cyber security. They must develop both offensive and defensive cyber security capabilities so that they can serve India better.
Posted by PTLB at 10:47 PM No comments:

Power Grids Cyber Security In India And Its Challenges

SCADA may be the new cyber attack priority for cyber criminals and rouge nations. We must ensure sufficient cyber protection of SCADA systems in India in general and critical infrastructure in particular.

The recent power blackout in India was massive in nature. Although no hints of a cyber attack upon the critical infrastructure and SCADA system was reported yet this may be a possibility in the future. Further, till now we are not even aware that the recent power outrage was due to poor power infrastructure of India or due to any attack upon the SCADA systems managing the power grids, if any.

India's power minister Veerappa Moily has constituted a three-member panel to investigate last week's massive power failures in the country. Now he has added four additional members, including a cyber-security expert in this panel making it a seven member’s panel. It is obvious that India is also not excluding the cyber attack angle as well and is investigating the possibility of any cyber attacks against the power grids of India.

This is a good decision and Perry4Law and Perry4Law Techno Legal Base (PTLB) welcome the same. We also recommend that cyber security of automated power grids of India must be endured.  We hope for the best in this regard.
Posted by PTLB at 10:46 PM No comments:

Of late cyber security in India has been considered essential part of India’s cyber capabilities.  However, India is still not prepared to tackle the menaces of cyber attacks and cyber crimes. This is so because we have neither a strong cyber law nor effective cyber security capabilities in India.

There are many cyber security issues in India that have remained unredressed so far. It would be a good option if Indian government starts strengthening various aspects of cyber security in India one by one.
Posted by PTLB at 7:59 AM No comments:

Data Protection Laws In India And Privacy Rights In India

Data protection and privacy rights are two of the most important rights conferred by any civilized nation. Every individual and organisation has a right to protect and preserve her/its personal, sensitive and commercial data and information. This is more so regarding health information and details that is required to be kept secret by laws like Health Insurance Portability and Accountability Act of 1996 (HIPAA) in United States.

Of course, we have general laws and some of the provisions of these laws can be applied to data security, data protection and privacy protection in India. However, that is a temporary solution and in the long run we need dedicated privacy rights, privacy laws and data protection laws in India.

The ball is again in the court of judiciary and it has to play a pro active role once again. The Supreme Court of India must expand privacy rights in India as that is the need of hour. Fortunately, the issue is already pending before it and there would not be much trouble in formulating a privacy framework for India.

However, in the ultimate analysis, it is the constitutional duty of Indian Parliament to do the needful in this direction. Indian Parliament must enact sound and effective privacy and data protection laws for India as soon as possible.
Posted by Geeta Dalal at 5:53 AM No comments: