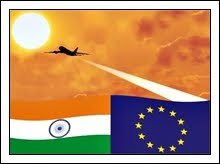 India and European Union (EU) have been trying really hard to formulate a comprehensive free trade policy to apply to both goods and services, and facilitate more European investment in India. EU and India now believe that they are getting closer to an agreement which would be more fruitful for both parties.

This is so despite the differences between EU and India regarding intellectual property rights (IPRS) especially regarding pharmaceutical patents. IPRs in India are governed by respective legislation and at the International level they are governed by TRIPS Agreement. Now EU is insisting upon “TRIPS Plus Conditions” that India is not interested in agreeing to. India’s stand on highly sensitive IPRs issues has been formulated by the high-powered Trade and Economic Relations Committee (TERC) at its recent meeting Chaired by Prime Minister Manmohan Singh.

Meanwhile, EU’s Trade Commissioner, Karel De Gucht, has announced plans to slash the number of countries, from 176 to 80, that benefit from the generalised system of preferences (GSP) scheme, whereby eligible nations enjoy reduced or zero customs tariffs on imported goods. He said that the action is aimed at large emerging economies like India, Brazil and Russia, which did not require continued specialised assistance, given their newly muscular economies.

But, with both Brussels and New Delhi keeping the precise details of the deal a closely guarded secret, the talks have aroused serious concern in both Europe and India. In February, Corporate Europe Observatory, a research and campaigning group, sued the European Commission over its conduct of the free trade talks. The lawsuit accused the commission of violating rules on transparency and democracy by refusing to disclose details of the negotiations publicly, despite sharing them with powerful European business groups.

A more rigorous stand has been taken by NGOs and other dealing with healthcare. If TRIPS Plus provisions are pushed by EU and accepted by India, it would hamper the ability of developing countries to fight against life threatening diseases. The EU, in the face of the protests, has backed away from some of its demands, including its request for protection of multinational drug companies’ clinical trial data, which Indian companies use to get their own low-cost generic copies approved. It seems the EU India free trade agreement would not be an easy ride especially due to large public interest attached to healthcare and affordable medicines.
Posted by B. Singh (PTLB Blog) at 12:49 AM