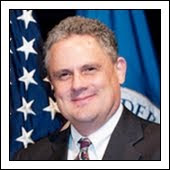 United States (US) has recently declared its international strategy for cyberspace. With this it has also shown its willingness to take cyberspace issues like cyber law, cyber crimes and cyber security seriously. This is a good step in right direction for any country including India. However, nothing is more beneficial than a harmonised and international standard in this regard.

US is also entering into bilateral agreements with countries like India in this regard. For instance, India and US are going to have a homeland security dialogue very soon. Further, a greater India US cyber security cooperation is also on the cards.

In a significant development, Phil Reitinger, the Department of Homeland Security's (DHS) top cyber and computer crimes official, is resigning just days after the administration launched its most ambitious cyber security initiative.

The DHS cyber team has monitored a surge of major cyber attacks in the private sector, with crises like the penetration of Google by Chinese hackers, aggressive attempts to break into NASDAQ's computers, and most recently, an audacious but simple infiltration of RSA, a top cyber security company perhaps best known for its SecurID computer security product.

Reported friction between DHS and other government agencies has diminished under the watch of White House senior director for cyber policy Howard Schmidt, who was charged by President Obama with de-conflicting and streamlining cyber response and policy priorities associated with it. Last week, Schmidt sent to Congress detailed guidance from the White House about legislation to establish a formal way to protect and certify the nation's critical private infrastructure, as well as formally give DHS authority over the dot.gov domain.
Posted by PTLB at 11:13 PM