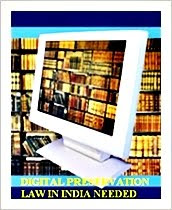 Digital preservation is the process where traditional records and data as well as contemporary records are managed and preserved in a manner so that the information can be accessible by our future generations.

Digital preservation has also assumed significance due to the extensive adoption of Internet and networking technologies. Individuals and organisations are producing vast amount and diverse nature of digital information that if not preserved would be lost forever. Digital preservation is a trustworthy solution ensuring long-term access to the past and contemporary digital information form future references.

Digital preservation in India is in its infancy stage. Although some discussions in this regard have been undertaken by some departments of Indian government yet they are far from satisfactory. Even a national digital preservation programme (NDPP) of India has been launched but it has been lying dormant for many years. Of course, some institutions like Reserve Bank of India (RBI) have good public records keeping framework.

Digital preservation issues in India are going to be more complicated with the enactment of laws like digital millennium copyright act (DMCA). Efforts are in the pipeline for adoption of an efficient digital rights management (DRM) system in India. Intellectual property rights (IPRs) are commonly found conflicting with digital preservation initiatives. Technological issues of IPRs would also pose great challenges before the digital preservation initiatives of India. We also need to change form of various IPRs protected works from one form to another. This sometimes results in IPRs violations.

Further, technological challenges have also to be managed by India in this regard. With the rapid advancement of technology day by day, old applications and methods are becoming obsolete. We need to upgrade them from time to time. Recent traditional knowledge digital library (TKDL) of India is one of the most innovative and much needed initiatives undertaken by Indian government. Being a digital library it must ensure digitalisation of contents as well as their digital preservation.

Indian government in general and ministry of culture in particular must pay special attention to digital preservation requirements as in future the culture ministry would be the one that would require it most.
Posted by PTLB at 10:26 AM