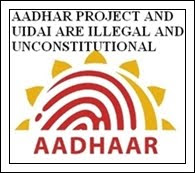 Recently, biometric data of about 200 registrants stored on laptop(s) were stolen. Now it has been reported that the Madhya Pradesh Police have seized from a SIMI activist an Aadhaar card with a 12-digit unique identity number bearing someone else’s name.

During a search at Zakir’s rented place in Ratlam, the police recovered an Aadhaar card, a driving licence and fake marksheets. The UID card made in Nanded town of Maharashtra had Zakir’s photograph but bore a different name, Sadique Khan. Apparently, Zakir had married a local woman under a false name and showed her home as his residential address.

This shows how simple it is to get a fake Aadhar number through various sorts of manipulations. However, this would be acceptable to Indian government as it is not interested in the “identity” of the concerned person but in his “biometric details” that can help in the e-surveillance activities.

Irrespective of what name or identity a person holds, his biometric details would always remain the same and Indian government is targeting this aspect.
Posted by PTLB at 3:16 AM