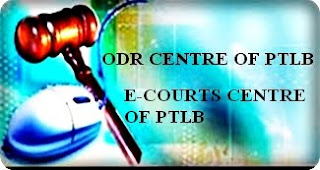 Information and communication technology (ICT) has streamlined the way disputes are agitated and resolved. Legal proceedings are increasingly using online platforms and cyberspace for initiation of legal proceedings and their dispute resolution.

However, legal frameworks that can supplement and strengthen such disputes resolution are missing. For instance, the legal enablement of ICT systems in India is still missing. We have no legal framework for online dispute resolution in India (ODR in India) as well as for establishment and management of e-courts in India. Till now we are waiting for the establishment of first e-court of India and use of ODR in India.

India is using alternative dispute resolution (ADR) mechanisms like arbitration, mediation, etc for long. However, there are very few ODR service providers in India. This is because in India we neither have awareness about ODR nor we have expertise to mange the same. Realising the same, Perry4Law and PTLB have provided the exclusive technology dispute resolution policy of India and ODR policy of India so that ODR may gain popularity and a wider acceptance in India.

Internet Corporation for Assigned Names and Numbers (ICANN) has been planning to expand the list of generic top level domain names (gTLDs) among several issues. The same was put as one of the items of the agenda to be voted and decided by ICANN at the second public meeting of the year on 20th June 2011 at Singapore.

Finally, after a long gestation period, ICANN has approved the idea of allotting new gTLDs. Of course, this allotment would not be simple process and filing of gTLD applications would need good techno legal expertise.

Further, these gTLDs allotment would also give rise to many unforeseen challenges and domain name, brands and trademarks disputes in the future. An improper representation of a case or domain dispute may result in loosing the same. Thus, before agitating a domain name dispute at national and international level, knowing of the Uniform Domain Name Dispute Resolution Policy of ICANN is a must.

We hope this note would help all the present and future domain name holders and ICANN’s new gTLDs applicants.
Posted by PTLB at 12:08 AM