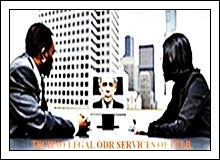 Recently European Commission suggested use of ODR for cross border consumer disputes. Tilburg Law School at Tilburg University has also launched a project that would sue technology in Europe to broaden access to justice. Now European Commission has suggested use of ODR for consumer dispute resolution. The Commission says this will be a cheaper and possibly more effective way for consumers to get redress in disputes with traders

The European Commission wants member states to introduce online alternative dispute resolution (ADR) schemes consumers can use when in dispute with traders. The Commission is concerned about an absence of ADR schemes in some market sectors. It also said the lack of information available to both traders and consumers about ADR schemes needed to be addressed.

While European countries and developed countries are adopting ADR and ODR to a great extent, ODR in Asian countries has not been successful. In the Indian context we have no ODR Policy in India. Even we do not have a Technology Dispute Resolution Policy of India. Now we at Perry4Law and Perry4Law Techno Legal Base (PTLB) have provided ODR Policy of India and Technology Dispute Resolution Policy of India. We hope this would be helpful for all concerned. We also hope India would also consider active sue of technology for dispute resolution.
Posted by PTLB at 12:31 PM